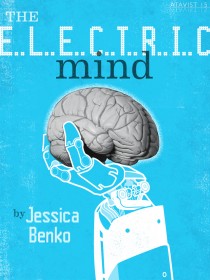 In The Electric Mind, Jessica Benko tells the story of a radical new technology, a pioneering group of researchers, and one woman’s effort to transcend her paralysis.

It took me a little while to realize that I had seen this story before on The News Hour. My own journey has led me to sometimes irreverent observations about Galvani and cockroaches, but that masks how much I appreciate what’s available and how much will yet be realized. There’s a much healthier and more inspiring perspective in this story.

She made the decision, she says, not because she had given up on the promise of BrainGate, which she believes will eventually lead to a functional cure for paralysis. But controlling an assistive device, like a robotic arm, isn’t her goal anymore. She wants to move her own arm.
To that end, she wants to pursue functional electrical stimulation, FES, which uses electrical currents to trigger muscle contractions and enable limb movement. The BrainGate researchers hope to someday link the motor-cortex implant of a paralyzed patient to FES devices, to reconnect the brain to the limbs. For now, though, and likely years to come, they need to work at refining the devices that read and record signals in the brain before adding the additional factor of an external device injecting signals into the body.

Cathy doesn’t want to wait that long to feel her body move again. She’s eager to participate in other trials, other studies. She has received cord-lengthening surgery on the tendons in her arms and wrists to ease the contractions. With physical therapy, she says, she has gained some range of movement in the hope of using FES to gain useful control. She still can’t move her limbs or speak, but she has lived at the vanguard of scientific research and of advocacy.”